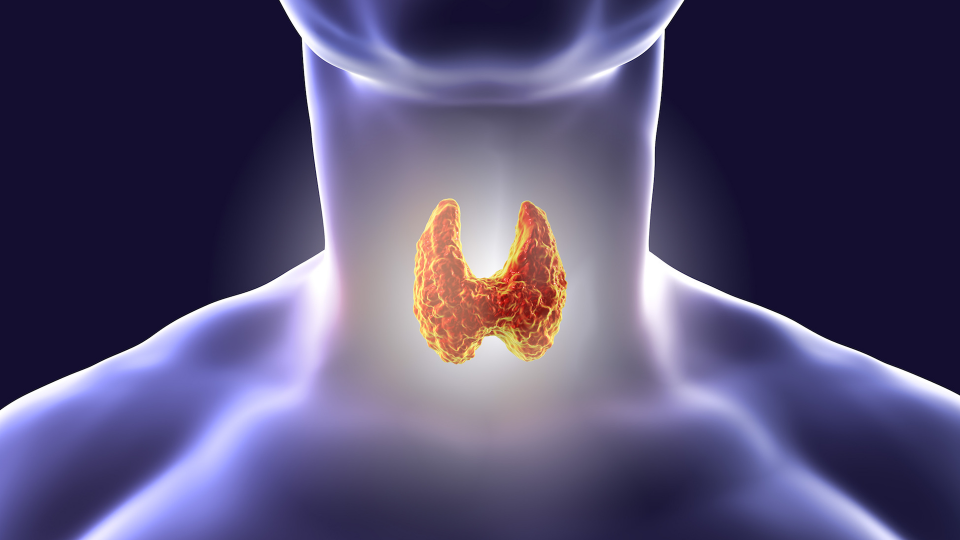 “What is thyroid?” It is one of the frequently asked questions about the thyroid, which is generally referred to as a disease name. Although often referred to as a disease, the thyroid is actually an organ located in front of the trachea. The most important function of this organ, which has a structure similar to the letter U or H and resembles a butterfly with this structure, is to produce hormones that are effective in the regulation of many functions in the body. These hormones are T3 (triiodothyronine), T4 (thyroxine) and calcitonin. The thyroid, which produces, stores and releases these hormones when necessary, is the size of a walnut and weighs 15-20 grams. These secreted hormones stimulate the organ or related system via blood circulation. The regularity of the functions of the thyroid gland affects the metabolic processes of the body and is very important for health. The functions of the thyroid gland that produce, store and release hormones are also controlled by the pituitary gland.

HOW DOES THE THYROID GLAND WORK?

WHAT ARE BENIGN THYROID DISEASES?

An enlarged thyroid gland for some reason is one of the benign thyroid conditions. Thyroid enlargement, also called goiter, can occur in only one part of the thyroid gland or in several parts. This growth may develop as budding in the inner or outer region of the gland. These growths showing budding are called nodules and the thyroid with changing structure is called nodular goiter. It is defined as a single nodule goiter when only a single thyroid nodule develops in the thyroid gland, and as a multiple nodular goiter in multiple formations. In addition, in some cases, there are cases where the thyroid gland grows more than normal into the chest cavity. This type of goiter enlargement is called substernal goiter. “What is Hashimoto’s?” in thyroid diseases. The answer to the question is also among the questions asked frequently. Another common condition in thyroid diseases in the benign group is thyroid inflammation. In this disease, also called Hashimoto's, there is a condition that causes the autoimmune system to deteriorate. In this disorder, which is called Hashimoto, the body's immune system perceives this inflamed thyroid gland as a foreign substance, and therefore, an imbalance in metabolism may occur.

WHAT ARE MALIGNANT THYROID DISEASES?

Thyroid gland cancer is one of the malignant thyroid diseases. Cancer, which occurs in the cellular structure of the thyroid and arises as a result of the deterioration of these cells, is sometimes kept under control by simply monitoring and increasing the quality of life of the person. At this stage, it may be possible to carry out the treatment with medication, changes in the person's life, and the use of surgical methods. Thyroid cancers, called follicular and papillary, are cancers that are common in the community and can be treated at an early stage.

WHAT ARE THE SYMPTOMS OF THYROID GLAND DISEASES?

When the thyroid, one of the internal secretory glands of the body, cannot fulfill its functions, it creates many different health problems and some thyroid symptoms in line with these problems. Thyroid cancer symptoms are as follows:

WHO GETS THYROID DISEASE?

HOW IS THYROID TEST DONE?

In order to diagnose the disease in the early period it is necessary for people in the risk group to have hormone tests routinely performed in line with the complaints they experience. In case of any nodule formation in the thyroid gland, the situation evaluation is made with the joint opinion of Endocrinology, Radiology, Nuclear Medicine and Pathology units. Then, the examination of the nodules is assisted by the ultrasonographic imaging methods and it is determined whether the nodule contains a cancer risk. Drug treatment is also preferred for small nodules with a low risk of cancer. Needle biopsy is also used to search for cancer in the thyroid glands. This biopsy application is performed by the pathologist, general surgeon and radiologist together.

WHAT IS IODINE (ATOM) THERAPY?

Iodine therapy is an effective method applied in cases where the thyroid gland works more than normal and after thyroid cancer operations. In this treatment, radioactive iodine is administered orally to the patient, and it is absorbed by the intestinal and gastric system. Iodine absorbed by the thyroid cells makes it easy for the thyroid gland to function normally. Iodine given to the patient with this method causes the thyroid cells that show excessive growth to lose this feature. Iodine therapy is also frequently used in goiter disease that occurs as a result of this overwork in the thyroid gland. The dose of radioactive iodine given in the treatment is low and the patient can go home after the treatment without having to stay overnight in the hospital. However, before this treatment, the patient should not consume certain foods, take medications and the patient should be hungry. Foods that patients should not consume before radioactive treatment can be listed as fish, carbonated drinks, shellfish and foods containing iodine. This treatment does not have any severe side effects, but it may rarely cause nausea in the person. In order to eliminate the side effects that may occur, the patient should consume plenty of water and get plenty of rest after iodine treatment.

HOW IS THYROID SURGERY PERFORMED?

Thyroid surgery is performed unilaterally or bilaterally, depending on the development of the disease. The operation is called thyroidectomy and the aim of the operation is the removal of the thyroid gland. In one-sided operations, the tissue in the problem area is removed, and in two-sided operations, the entire gland is removed. In addition, in some surgeries, lymph nodes are also removed. One of the biggest risks of these surgeries is the damage to the vocal cords of the patient. With this injury, hoarseness may occur in the person, and recovery usually takes a few weeks to a few months. However, in some cases, the vocal cords may not fully experience their former performance. After such situations, discomfort such as hoarseness, fatigue in the voice and inability to reach high tones may be experienced. Thanks to the medical techniques created with the developments in the field of technology, solutions can be created for these potential complications.