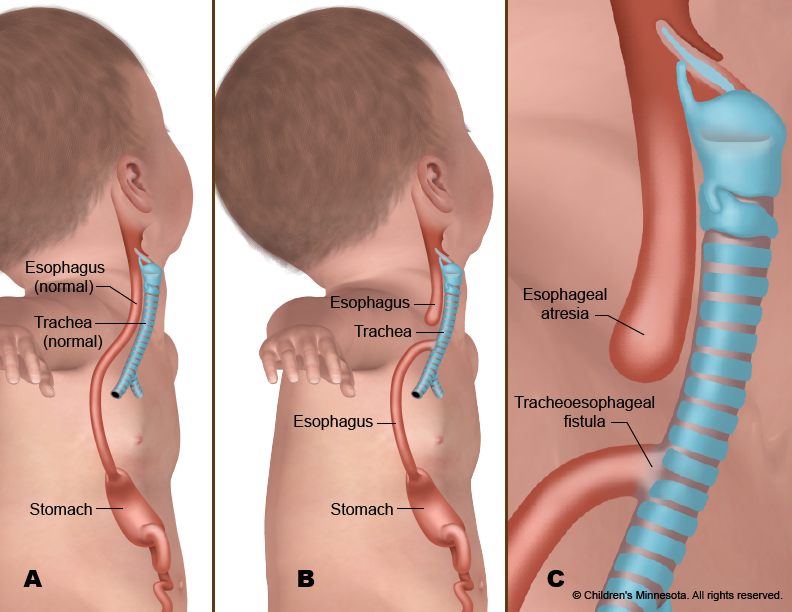 WHAT IS TRACHEOESOPHAGEAL FISTULA?

A trachea-esophageal fistula is an abnormal connection in one or more places between the esophagus (tube from the throat to the stomach) and the trachea (tube from the throat to the windpipe and lungs). Normally, the esophagus and trachea are two separate tubes that are not connected to each other. It is also known as a trachea-esophageal fistula, TE fistula, or simply TEF. TE fistula is a birth defect that occurs in 1 in 5,000 births and occurs during the formation of a fetus in the womb. The fluid swallowed by a baby with a TE fistula may pass through the abnormal connection between the esophagus and the windpipe. When this happens, the fluid enters the baby's lungs.

WHAT CAUSES TRACHEOESOPHAGEAL FISTULA IN CHILDREN?

Under normal conditions, there is no connection between the trachea and the esophagus. Because the esophagus and the trachea, although they are in a side-by-side position, perform their functions through separate channels. However, in case of a structural defect, a connection occurs between these two channels and this connection is defined as a fistula. Due to this connection, an undesirable situation arises when the child eats, such as the food escaping into the trachea. There are also different types of trachea-esophageal fistula disease. The most common trachea-esophageal fistula is the partial absence of the esophagus and its lower part in a structure connected with the trachea.

SIGNS AND SYMPTOMS OF TRACHEOESOPHAGEAL FISTULA AND ITS COMPLICATIONS

Babies who experience trachea-esophageal fistula formation usually regurgitate sucked milk while feeding and cannot swallow at the same time. The milk and nutrients coming back from the baby's mouth can escape into the lungs, and as a result, the baby begins to cough with a feeling of suffocation. Sometimes it can be deprived of oxygen and experience bruising. Breathing air can also pass from the fistula to the stomach, causing the baby's belly to swell. As a result, the acidic fluid in the stomach passes from the fistula to the lungs and may cause lungs to collapse.

CONGENITAL DISORDERS THAT MAY BE SEEN WITH TRACHEOESOPHAGEAL FISTULA

DIAGNOSIS OF TRACHEOESOPHAGEAL FISTULA IN CHILDREN

TREATMENT OF TRACHEOESOPHAGEAL FISTULA IN CHILDREN

In the treatment of tracheoesophageal fistula, the fistula is closed and the trachea and esophagus are connected correctly. However, this surgical treatment method may differ according to the disorder experienced. After the treatment is applied, the baby is fed with a catheter. Fluid support therapy is also applied by intravenous route until the baby is on normal feeding. After a while, the baby's esophagus x-ray is taken to monitor the recovery. If a repeated or gradual surgical approach is required after this evaluation, a feeding tube is placed in the baby's stomach and the baby continues to be fed with this tube until the process is completed. In this process, the baby stays in the hospital until he/she starts to eat normally. Correction of atresia and tracheoesophageal fistula can often be accomplished with a single operation. In these babies, post-operative leakage, stenosis, and additional anomalies in the baby determine the course. Early diagnosis and planning of the process are very important for the quality of life of the baby. 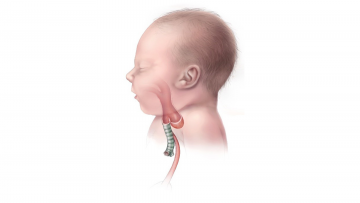